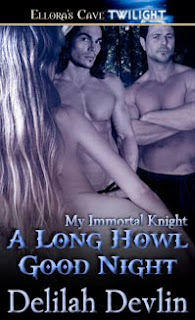 Part of the My Immortal Knight series.

Werewolf Aila Mack is ready to get her groove on during a full moon. She’s a part-time hooker because she prefers to keep her liaisons strictly about the sex. She’s had a taste of were-domination and prefers to be in charge of her own destiny.

Brothers Kynan and Jack Parker are on a mission. Their species is in need of breedable females. When the Dark Mountain clan finds a sex agency dealing in female werewolves, they aren’t happy women are selling their bodies in order to take care of their monthly itch. They take action when it’s discovered there’s a fertile female in the agency’s stable.

Kynan and Jack are given the job of bringing home their mate but discover quickly there’s more going on beneath the surface than simply a stubborn female who refuses to be collared. Aila’s tempted as never before, as the brothers, one gentle and one fiercely intense, peel away the hard shell surrounding her Wolfen heart.

The heroine of the story, Aila, has some secrets in her past that she would rather not poke at too much. When she goes out on a job to meet Jack and Kynan, she ends up having to face her past.

Jack and Kynan, co-heroes and brothers, want her for their future, but they don’t know why she’s chosen her present job as a part-time hooker.

You don’t want to miss their evolving journey of trust and love. Delilah Devlin leaves the reader satisfied and hopeful with this beautiful tale.