Elizabeth Jewell, A Matter of Duty 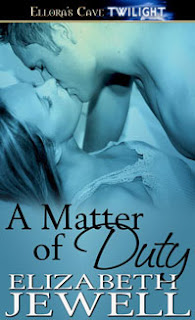 Title: A Matter of Duty

Sequel to A Matter of Faces.

A little over two years ago, Piper met Trey, a shapeshifter who impersonated her dead boyfriend and then led her on the adventure of a lifetime. Along the way, they fell in love.

Now Trey is required to father children to sustain his race. Piper knew this day would come, but she’s not prepared to face Nadia, the shapeshifter woman first in line to have Trey’s babies.

She’s even less prepared to consider the possibility of having a child herself, knowing it’s impossible with Trey. But Nadia’s husband is human…and that’s when things get really complicated.

A Matter of Duty was a quick short read. Exotic in nature it touched on some hard aspects of the constitution of marriage in the human world and mating in the shifter world. The sex was visual and extremely well written. The issues with creating life felt awkward. Guilt and unease ran rampant with each individual having bouts of jealousy. The blurb and the concept drew my interest right away but reading the story left me feeling like a voyeur out in the cold.