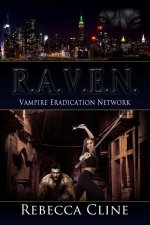 Kachina Raven is a Reconnaissance Agent for the Vampire Eradication Network.  One night while escaping a murderous cult of vampire wannabes, she meets Kael.  There is an immediate attraction but she knows there is something odd about him.

He has some very unusual skills and abilities.  She’s sure he isn’t a vampire but knows he’s no ordinary human either.

She knows she’ll always be stalked by vampires and doesn’t want to put anyone else at risk by having a relationship with them. Her life is further complicated by the relentless pursuit of a homeland security agent.

Kael is an alpha male used being the protector but Raven makes it clear she can fight her own battles. He’s frustrated by her refusal to acknowledge the strength of the attraction between them and is determined to have her as his mate.

Kachina Raven is a tall Native American beauty who works for the Vampire Eradication Network, otherwise known as VEN.  She is an enhanced human with nearly vampiric abilities herself.  Her job is reconnaissance for the VEN.  While on a recon mission without her backup, she is injured severely and ducks into a biker bar to blend with the crowd.  While there, she meets Kael.

Kael also appears to be doing some recon of his own in the bar.  He's waiting for a pretty long haired girl.  Is Kachina the girl?  It seems not, but he can't be sure.  From the moment they meet, sparks fly.  But Kachina is not truly full human and can't share her secrets with Kael.  She also doesn't fully trust him.  He moves too fast, seems too strong and knows things he shouldn't.  No one can hear that well.  Is he one of the hated vampires, a lurker, or something else?  Kachina doesn't know.

This book is well written and keeps you reading late into the night.  A long novel, it moves right along and keeps you turning pages.  Clearly this book is meant as the beginning of a series.  It introduces many characters and develops most of them fully.  I did think it ended a bit abruptly after 400 pages of detailed descriptions, but it leaves you waiting for the next book to continue the tale of life in the VEN.

How will Kachina and Kael blend their lives?  Will Killer hookup with a pack member or the Homeland Security agent who has a thing for her?  Where has Taven been sneaking off to?  Is Kachina's brother Palin actually a “good vampire”?  These are all questions I await the answers of in later instalments.  Any lover of the paranormal, urban fantasy genre will love this book.