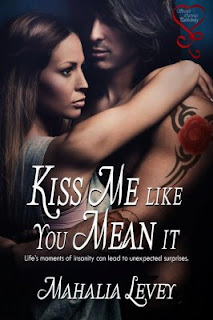 Title:  Kiss Me Like You Mean It
Author:  Mahalia Levey
Rating:  Four And A Half Siren Stones

One gigantic mistake threatens to bring Carlie Steven's world crumbling down. Everywhere she turns she's faced with reminders of the drunken moment leaving her friendless, expelled from her Ivy League College. With Jackson out of the country singing for the troops, his empty home will give her the breathing room she needs while coming up with a game plan to fix her situation.

Playing guitar used to be enough for Jackson Laurant. For years he's played the part of not giving a fuck. Too many one night stands in the bag leave him wanting what his two friends have found. With only a handful of shows left on the tour, his mind wanders to the off limits Carlie Stevens. For years, he’s denied the brewing attraction. When he finds she’s taken up residence in his home. He may have the in he’s wanted for too many years to count.

Kiss Me Like You Mean It is a nice follow up story for Shut Up and Kiss Me.  It is a standalone story, but there is a lot of history from the previous story mentioned in this new one.  The reader gets to revisit characters, get some follow up information, and see where the next story might lead.

Jackson Laurant is a member in Carlie Steven’s brother’s band.  They’ve known each other since they were both children.  They share some history, but their family situations couldn’t be more different.  They are both products of their environments and how they evolved and thrived alone is tested in this story.  Their friendship blossoms into love after some serious trials and errors.

The result is some explosive sexual tension that threatens to end what they just started.  Carlie and Jackson set fire to the pages as they find their balance.