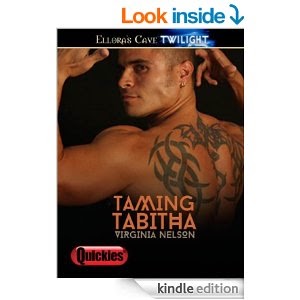 
Author:  Virginia Nelson
Rating:  Four And A Half Siren Stones

Book 1 in the Bond of Three series.

As a Seer, Tabitha has always known the day would come when she’d have to face her destiny and succumb to her future mate, as only then would her powers fall fully under her command. Tradition dictates that Tabitha run, forcing her intended to prove his worth—and his desire. But it is the discovery that Tabitha is destined for two mates, creating a bond of three—unheard of among her people—that sends her running faster than she’d ever expected.

This is the first story to the Bond of Three Series.  Taming Tabitha sets up the stage for the next book with hints of magic and darkness in the future.  There is mention of a queen and I’m hoping the next book will go into a more involved explanation as to what exactly they are as a people.  We are led to believe they are immortal and a different species all together, but how did they end up with humans?

In this short story we are introduced to Tabitha Hoffman who is a Seer and has visions.  Lancaster and Gage are her mates and on the hunt to claim her together.

We get a little back story on each character and the path they traveled that led them to the decisions they made.  Fear and uncertainty ruled Tabitha and kept her running.  Lancaster and Gage have been searching for answers.  When the three of them finally start communicating there is an explosion of passion.