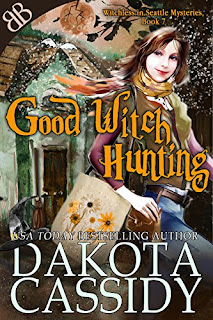 What happens when an ex-witch/medium, an ex-nun, a demon, and a dead British spy meet?

After a really busy summer, things have settled down for my crew here in Ebenezer Falls. That is until my favorite Spy-Guy, Win has a crazy recollection of the night he was murdered!

A demon who, coincidentally, is accused of murder, that is!

You know what that means—Stevie and gang to the rescue!

Dakota Cassidy does not disappoint with the long-awaited book 7 in the Witchless in Seattle series.  She delivers a fast-paced mystery with her beloved Ebenezer Falls characters.  Dakota Cassidy racks up the sexual/love tension between Stevie and Win leaving readers on the edge of their seats wanting more.

In Good Witch Hunting, we are introduced to two new characters that will be playing a major role in their own series very soon, Trixie Lavender and Coop.  They are entangled in a murder mystery and Stevie is caught up in the middle again.  Offering to help these two unlikely friends may be more trouble than even Stevie can handle.

Readers won’t want to miss the debut of Trixie Lavender and Coop.  The ex-nun and demon are extremely entertaining.  This world just expanded with these new characters and I hope to see some more cross-over in the future.

The Witchless in Seattle series is best read in order.  It’s a fantastic cozy mystery series that I’m hoping will get a little naughty as we find out what is to become of Stevie and Win!

I received an ARC for an honest review.
Posted by Siren Book Reviews at 12:06 PM