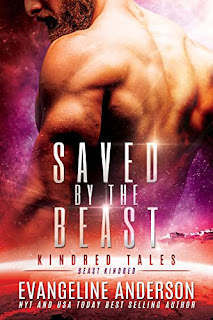 A warrior who thinks he’s too old to find love A desperate woman with a dark past Can Makenna be…Saved by the Beast? Are you ever too old for love? Bard, a Beast Kindred, thinks he is. He lost his wife twenty years ago when he was just a young warrior and he’s never looked at another female since. But when he sees a young woman being sold to a disgusting Trollox on Passion Prime, he has to rescue her from her horrible fate. Makenna knows she barely escaped, but even safe aboard the Mother Ship with Bard, she is still in danger. She’s about to undergo her first “ripening”—a period of intense sexual need that can lead to death if she has no male to help her. Naturally, she wants Bard to be that male—she knows the moment she meets him that he is the one for her. Unfortunately, the big Beast Kindred has other ideas. Though he longs for the curvy little female, he pushes Makenna away, certain that he’s too old for her. But when he pushes her too far, the Trollox she was promised to is ready to snatch her back. Now a battle of life and death is being played in the lush, blue jungles of Rageron, the Beast Kindred home world. Will Bard get to Makenna in time? Read, Saved by the Beast to find out! Trigger Warning: Anyone who has experienced sexual abuse may find parts of this book disturbing due to the heroine’s backstory. I try to keep these details in the background and not dwell on them, but I wanted to warn you just in case. Please read responsibly!

Although this book is part of a series, I did not find that I needed to have read all the previous stories in chronological order to enjoy Saved by the Beast. If this is the first book you are thinking about picking up by Evangeline Anderson in the Kindred World then there are a couple of things you need to know. The Kindred race is a warrior race made up of mostly males that worships a Goddess and they revere and protect females. The female that they bond to for life is sacred to them and to be protected always. Commander Bard in Saved by the Beast is exactly what you would expect from a protective Kindred when he finds a female in danger and distress.

Makenna has been taken off her home world to be trafficked and sold into sexual slavery. The final transaction is about to take place when Bard steps in. There is obviously abuse in this story, but the focus of the plot is in getting Makenna help and protecting her. I’ll admit the trigger warning at the beginning of the book had me wary, but the story was crafted carefully.

I enjoyed the journey that Bard and Makenna, an older Kindred and younger humanoid, took to develop a relationship. The creative imagination and world building in this story give us some very unique characters.

The main characters and plot focus surrounds Bard and Makenna, but there are characters on stage from previous stories. By the end of Saved by the Beast readers are clued into the next installment of the series.

Posted by Siren Book Reviews at 10:01 AM