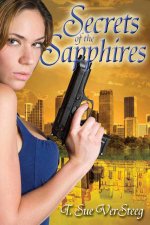 Title:  Secrets of the Sapphires

Nia Brooks entered the CIA to get to the bottom of her parents' deaths. Joining the Paranormal Division, she learns to fend for herself after dealing with prejudice, not to mention the vampires and shifters. Paired with an egotistical agent, the bloodsuckers and hairy boys don't seem so bad.

Garrett Van Deren has his own agenda behind joining the CIA. When his dead partner's body disappears without a trace, Garrett knows the vampire underground is responsible and the Paranormal Division offers him answers. He slams head first into a roadblock when he meets his new partner. A hundred pounds soaking wet, he'll be babysitting instead of tracking down the killer.

Tossed back in time by a mysterious white sapphire, two headstrong agents must learn to trust one another while they search for a way back to the Twenty-First Century and the people responsible for the rift in time.

In a world so different from ours, shape-shifters are known and roam around.  There's a special division in the CIA devoted to all things paranormal.  Nia Brooks is a part of that, fueled by deaths of family members.  Garrett is driven by a similar reason.

Secrets of the Sapphire is a paranormal, time travel, suspense, and adventurous story.  I was blown away at how the story lines blended so well and kept me reading.  I'd love to read more stories like this.  I found myself very intrigued by the characters and the plot.  And wow, what twists and turns that there were I never saw coming.
Posted by Siren Book Reviews at 1:49 PM