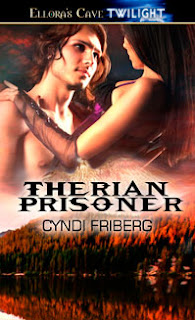 Though Devon comes from a line of cougar-shifters, her own animal nature has not yet been defined. The mysterious “backers” have captured her, intent on using her untapped Therian abilities for unknown ends. She escapes from their prison, but not from the emotional scars left by their abuse.

Ian, an ancient Therian raptor, offers protection and encouragement. Devon has always wanted Ian, always felt a connection deeper than friendship. But Ian insists he’s too old and jaded to make Devon an honorable mate. If she hopes to feel whole again, she must regain control over her emotions and desires. And she desires Ian.

At first Ian resists Devon’s attempts at seduction. She needs a shoulder to cry on, not a demanding lover, and Ian is never satisfied until his partners surrender unconditionally. But Devon stirs primal instincts and awakens ravenous longings he has suppressed for centuries. He wants her, but he fears the darkness inside him will destroy her.

Therian Prisoner is part of a series by Cyndi Friberg.  I had previously read Therian Prey so I already had a sense of the world and some of the characters.  I did not get a chance to read the second book in the series, but it makes no difference to the flow of this story.  The author does a nice job filling you in with background history as Therian Prisoner progresses and just builds up curiosity of the past.  Even though this is part of a series, it stands alone quite well.

Cyndi Friberg packed Therian Prisoner full of non-stop action that pulls you in from page one and keeps you enthralled.  The story is filled with twists and turns in the plot that will keep you on the edge of your seat.

Ian and Devon have a wonderful chemistry together as well as some history.  Even though these characters have been in the previous books of the series, the author ‘introduces’ us to them while letting us know that Ian and Devon have know each other for a very long time.

Ian rescues Devon unexpectedly from the evil backers that have been experimenting on her.  From there everything takes off for the two of them.  Ian helps her overcome some of the horrors that she experienced while in captivity.  Ian has lived a very long time and his experience and background help to make Devon more comfortable and able to trust.

There developing romance does not disappoint.  I look forward to seeing what will become of Ian and Devon in the future for while this story comes to an end the complete story has not been told.

During Therian Prisoner the main characters, Ian and Devon, shine, but there are a lot of other story lines that run through their tale.  It makes for a very interesting story.  There are several secondary characters that sparked my interest in Therian Prisoner.  Hopefully they will get their own romance later.

This is one of those series that will need to be followed.  The story lines, unanswered questions, and cliff hangers will have me coming back for more.
Posted by Siren Book Reviews at 8:52 PM

Stacey, thanks so much for reviewing Therian Prisoner. I'm glad you enjoyed the story and appreciate your comments. The next book in line is Therian Prize, featuring Jake and Heather.