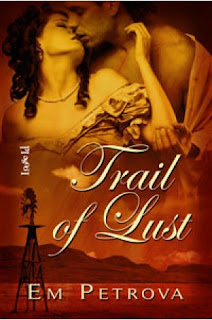 When Kathleen Allen sets eyes on the man she’s known since her youth, Graham Hollis, she learns what being a woman is all about. She can’t tear her gaze off the rugged and brooding cowboy. After she throws herself at him, he refuses to take her unless they’re married. A
secret wedding wasn’t exactly what she’d expected, though every heated touch gives her exactly what she wanted--and more.

An ex-Cavalry officer in the war for the South, Graham still fights his demons daily. When Kathleen enters his life, he finds himself resurrecting memories of the wife he’s lost, as well as needs he’d thought long dead. However, an ex-spy is fresh out of prison and Graham is certain he’ll try to reap revenge by harming the woman he’s grown to love.

Together, Graham and Kathleen must face perils, posses, and passions as they fight to hold onto the one thing they need to truly live—each other.

I enjoyed this book immensely!  From the beginning, it is obvious that Graham is a tortured individual.  And it’s also obvious early on that Kathleen has loved Graham since she was very young.  While she’s led a sheltered, albeit hard, farm life, she has the strength needed to pursue what she wants in life (Graham), overcome the obstacles they face (an ex-spy, an untrustworthy farmhand, her lack of sexual experience), and secure a future together.

This author took the time to create believable characters and to let the plot and those characters develop together as they moved through the various conflicts.  The sex was awesome; the details of farm life, the civil war and its effects on the country and its people; Graham’s family and his relationship with them: all of these elements together created a wonderfully engrossing story!
Posted by Siren Book Reviews at 12:14 PM