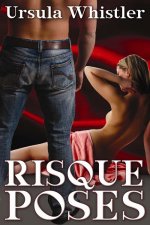 Yoga instructor Diana Courbet wants to celebrate the end of a messy divorce in the best way possible, starting with a one night stand with the sexy, tousle-haired artist in her yoga class. He's been the object of her desire for close to a year, and while he might be worth more than one sexy evening, that's all her heart is willing to risk. Mathias Kuning wants two things--to be a successful artist and Diana. Over the past year, he's painted Diana in a series of nudes that show how much he's grown to care for his beautiful muse. But to become a successful artist he has to show the sensual pieces, and to show them, she has to agree. Will the risque poses of Mathias' creation be the very thing that keeps Diana in his arms...or drives her out of his life forever?

This was a short but sweet read that, as an older woman, I could enjoy and relate to.  Diana’s dilemma with both her husband and their divorce as well as with Mathias was easy to understand.  The plot was not overly complicated.  Rather, the author developed the characters through Diana’s internal reflection and in her reactions to Mathias. Mathias was so sweet!  Yes, he was younger than Diana, but he managed to be dominant in a comfortable, sweet way that I found endearing.  I enjoyed the solution to the problem of the risqué poses and would really enjoy a sequel to this story!