Dakota Cassidy, Fangs of Anarchy: Killing the Alpha (Part One) 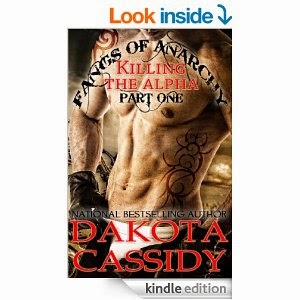 Irish McConnell would give his immortality for a taste of Claire Montgomery. But the Fangs of Anarchy leader can’t risk his biker club, his vampire clan, or his tenuous truce with werewolf Gannon Dodd, Claire’s pack alpha—and her intended mate. Nope. Vamps and weres don’t mix, and Irish has managed to keep that in mind for five long, lust-filled years.

But now Claire’s gone and done something really, really (really!) bad, guaranteeing her doom if she’s ever found out. Truce be damned, Irish won’t leave her unprotected, despite the fact this is one murder-filled bundle of trouble he doesn’t need.

And unfortunately for Irish, the trouble’s just beginning…

This is the beginning of a multi-part series.  New episodes will release approximately every two to three weeks.  This book is not meant to be read as a standalone story.

Irish has longed for Claire for five years.  Claire has been promised to another alpha werewolf as his mate.  Claire not being real keen on that plan took matters into her own hands and it gets a little messy.

Vampires and werewolves don’t mix, but when Irish stumbles across Claire and her mess, he can’t help wanting to protect her.  Irish comes to Claire’s rescue more than once and then they finally have it out.  Neither one can resist any more.  Their attraction and chemistry are palpable.  Claire and Irish light up the pages with their doomed love making.

The hero and heroine are very likable characters and as a reader I rooted for them.  The evil characters are evident and quite loathsome.  There are some plots within plots waiting to be hatched in this serial story.

Fangs of Anarchy: Killing the Alpha (Part One) was easy to get sucked into.  The characters are being developed right before our eyes as the plot unfolds.  Readers even get a new world to play in with Dakota Cassidy.  A plot twist at the end will have readers holding their breath until the next episode.

This story is part of a serial, and Dakota Cassidy knew right where to leave us hanging for more.  These serial books seem to be all the rage right now and are kind of like soap operas.  Readers will want to tune into this book opera to see what happens next!
Posted by Siren Book Reviews at 6:55 PM