Dakota Cassidy, Something to Talk About 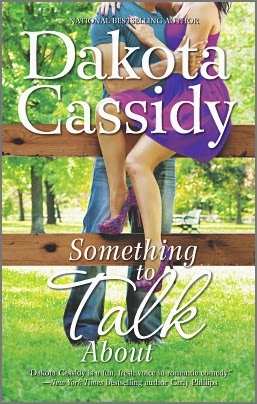 Title:  Something to Talk About

Sexy is as sexy does. And in Plum Orchard, sugar, it does!
Emmeline Amos is sick of her ex saying she's boring and prissy. After all, she works for a phone-sex company! (As general manager, but still.) On a rare girls' night out, fueled by blender drinks and bravado, Em accepts a shocking dare—to handle a call herself. But it's tipsy Em who gets an earful from an irate single father on the other end of the line. Awkward.
But not as awkward as discovering that same mad dad is Call Girls' gorgeous new programmer. Jax Hawthorne is still upset that his daughter called the "girlfriend store" on his behalf, but he can't deny he'd choose a hot-librarian type like Em if he were looking for love. Which he's not.
Em wants to do more than just talk the talk. So she makes a bawdy bargain with Jax. They've both been burned before—this time, they'll keep it strictly physical. Except as soon as they settle on no strings attached, things start to get tangled….

This is the third book in the Plum Orchard Series and Dakota Cassidy does not disappoint.  The cast of characters in this series is amazing.  We get to see and hear from some of the regulars and some new men are introduced in this story.

Jax Hawthorne made a slight appearance in the last book, but was up front and center in Something to Talk About.  Jax is just the right knight in shining armor that Emmeline Amos needs in her life.  Em gets to know the man behind the handsome face and piercing eyes.  The man that is kind, caring, responsible, and a good father.  Not to mention extremely hot.  He’s sure to be her answer to a little adult alone time.

Emmeline is still reeling from her ex-husband’s betrayal and dealing with all the fall out.  Em and her two boys are still being hounded by the town regarding the scandal.  She needs to let loose and have some fun, but she’s not interested in any kind of relationship that could get caught up in her whirlwind life.  Jax knows just what Emmeline needs and he provides.  What follows are some steamy love scenes.

Something to Talk About is a wonderful story about second chances at love and life.  It is an extremely moving story that will leave the reader pondering.  The secondary characters spice up the story and the children are delightful.  The plot twists and Dakota Cassidy’s sense of humor make this a page turner.

I look forward to seeing who Dakota Cassidy puts on stage next.  I highly recommend this story, but advise reading the previous stories so you are not lost in this one.
Posted by Siren Book Reviews at 6:33 PM