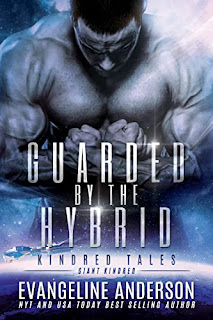 A woman trapped in an abusive marriage

A Kindred warrior hired to guard her As they grow closer, will Sark be able to give Isla up? Or will a secret part of him awaken and demand to keep her? Read Guarded by the Hybrid to find out. Lady Isla Le’rank is trapped in a loveless, abusive marriage, all because she is a rare Moonstone goddess. But she cannot bear her husband an heir until her skin takes on the pearly, opalescent glow that means she is ripe for mating. Since her husband has failed to bring on the glow himself, he hires a Kindred warrior to help him. Sark is a Hybrid—half Giant Kindred and half Ice Drake Kindred. He hires himself out as a Security Specialist to the rich and famous of the galaxy. But this latest contract is very strange—why in the Seven Hells would Lord Baslik Le’rank hire him to act as his wife’s bodyguard…and also massage her every night? The contract is strange but the money is good—Sark takes the job. But when he finds that his new charge is as defiant as she is beautiful, the ice around his heart begins to melt. Isla, for her part, finds that her body reacts to the touch of her new guard in a way it never did for her cruel husband. She begins to care for Sark and he begins to care for her, but he knows he can never have her—she is another male’s mate. But when she finally begins to glow, during a dangerous trip to the world of Fenushia, will Sark give her up—or will a buried part of him awake and demand to keep her? You’ll have to read Guarded by the Hybrid to find out!

Guarded by the Hybrid has a new giant/dragon hybrid, Goddess intervention, a princess that needs rescuing, and lots of steamy romance. What more could you ask for in a paranormal romance?

I loved Sark and Isla and their interactions together. They burned up the pages with their shared chemistry.

This story also contains new humanoids on another planet full of more sci-fi adventure and creativity as their journey takes them off world. The humanoids of Fenushia are very interesting as is their way of life.

Fair warning that Isla does suffer from domestic abuse in this story, but don’t let that deter you from reading, as always, Evangeline Anderson manages a pleasurable outcome for her characters.