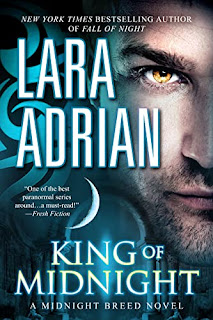 The line between darkness and light is drawn in blood, and the stakes have never been higher. Nothing less than the fate of the world rests in the hands of the Order, and in one Breed warrior's quest to thaw the heart of an immortal queen in the final novel of Lara Adrian's New York Times and #1 international bestselling Midnight Breed vampire romance series. As a Breed warrior and the son of the Order’s founder and commander, Darion Thorne is an exacting tactician and a lethal combatant, yet nothing can prepare him for the catastrophic act that forces him to step to the helm of the Order as its leader. With their adversaries growing bolder and more brazen with every strike, Darion knows he must take the war to them before it’s too late to stop them at all. Yet of all their enemies, the one most dangerous for Darion is the beautiful, yet volatile, Selene, Queen of the Atlanteans. Determined to recover four powerful crystals stolen from her ages ago, Selene will go to any lengths to have them. When that goal puts one of the Order’s own in the crosshairs, she finds herself locked in a personal battle with Darion, a Breed warrior she knows she should despise, yet who stirs an unbidden desire within her. With the battle lines drawn between them and a diabolical evil on the rise, can Darion and Selene put aside their mistrust in time to save all they hold dear, or will they see the world plunge into a darkness that has no end?

The Midnight Breed Series is extraordinary and I’ve enjoyed every book, looking forward to taking the journey with new characters. King of Midnight was no exception. I dove back into the Breed world excited for a new story and savoring it until the last page. Final books in a series are always bittersweet. I wanted to know how Lara Adrian would wrap up her series, but I didn’t want the story to end.

Fans will not be disappointed with the final story featuring Darion and Selene. King of Midnight has everything a reader would want to see in a series wrap up.

These stories will live on waiting for new readers to stumble upon. The addicting characters and plot twists will enrapture future readers, and I envy them the start of an amazing adventure.

Posted by Siren Book Reviews at 8:31 AM