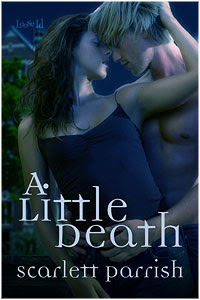 
Seeing dead people is all very well...unless one of them wants to kill you.
To Mallory Sharpe, vampires are a fact of life. They exist, walk the streets, and for the most part mind their own business. As a second-year university student, she doesn’t pay the undead much attention until she meets Jonathan Cutler. He has needs, and blood is only one. The other, Mallory is more than willing to help him with. After all, he has but one rule: to never spend more than one night with a woman. He won’t get attached, or consciously put anyone’s life in danger.
Another vampire, Cian Ambrose, isn’t so troubled by conscience. Mallory’s fair game, a weapon to taunt Jonathan with. In fact, it might be fun to make her his grail, or living blood donor, and Cian Ambrose doesn’t take kindly to the word no. He hasn’t heard it often in his one hundred and fifty years and it usually results in the other person ending up dead.
So with Mallory’s tolerance for undead guys running very low, Jonathan has to re-gain her trust, stop Cian killing her, oh...and for God’s sake, not fall in love.
Publisher's Note: This book contains explicit sexual content and graphic language.

Review:
A Little Death by Scarlett Parrish is an interesting story that will have you on the edge of your seat wondering what will happen next. The main characters of the story are Mallory, Jonathan, and Cian. However, I really enjoyed the banter between Mallory and her friend Duncan. The two of them had me laughing out loud.
Jonathan is a vampire and has become smitten with Mallory. He starts a yearning in Mallory that only he can quench. Cian is also a vampire that makes Jonathan’s life miserable by honing in on and hurting anyone that is important to Jonathan. Cian is a slippery, conniving, miscreant that, as a reader, you just want to smack upside the head. Jonathan does what he can to protect Mallory from Cian. There is plenty of mystery and suspense surrounding both Cian and Jonathan. The suspense keeps the pages turning.
Jonathan’s conscience and his need and love for Mallory make the erotic love scenes sizzle on the page. Mallory is a strong, independent woman, but she is putty in Jonathan’s hands.
This story is a wonderful addition to any paranormal romance lover’s library.
Posted by Siren Book Reviews at 7:36 PM