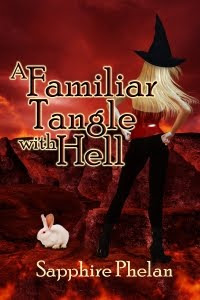 Title: A Familiar Tangle With Hell

Tina and Charun thought it was all over and that their life would be normal—well, as normal as it could be for an immortal Witch and her demon Familiar. Except there was another prophesy, one that laid claim that if Lucifer snatches Tina and mates with her before the last chime before midnight of the new year and gets her pregnant with his son, that the real Armageddon would begin, spelling the end of life as they knew it.

When Tina is stolen away, Charun, along with Jacokb the archangel, must race against time into the bowels of Hell to rescue her. But with demons, Lucifer, and a cute demon bunny with fangs out of a Monty Python nightmare, out to stop them and Heaven not lending a hand, will Tina

become the mother of the Antichrist and the start of a new Hell on Earth?

Imaginative and distinct, A Familiar Tangle With Hell stands apart from other Angels vs. Demons Armageddon stories. Bound together through their DNA, the relationship between Tina and her demon, Charun, is much deeper than the standard partnership of Witches and Familiars. Their love for each other grows as the danger increases and the erotic encounters between the two sizzle with explosive magic. Charun’s divine beginnings and demonic status creates a complicated and intriguing character who effectively uses the benefits of his torn existence to not only protect his soul mate but the world as well. After averting Armageddon once and becoming a witch to do so, Tina has honed her skills and is just learning to embrace her new reality when she realizes it is she who is to be the catalyst for Lucifer to wage the ultimate (and possibly final) war between good and evil.

Lucifer, as written by Sapphire Phelan, does not disappoint in all of his sadistic, malevolent, but contrarily sensual pursuit of domination over the heavens and earth. “The Big L” instils fear as well as lust no matter what form he takes throughout the tale. A wide cast of supporting characters on each side of the Good vs. Evil battle create a web of sub plots that adds to, rather than distracts the reader from, the general excitement of the story. From an Archangel turn coat to the fluffy and seemingly harmless soul eating demon bunny, each creature is written with creative vision.

The Holy and Unholy clash at the climax of the story in an epic war, keeps the reader flipping pages furiously. Mortality and all its weaknesses are exploited during the battle, leading the reader on an emotional roller coaster thrill ride. Life will never again be the same for Tina, Charun, or even fluffy, and this book creates a wonderful platform for a continuation to their saga.

Editing oversights and some repetitive dialogue keeps this book from ranking higher during my evaluation, but this book is fantastic read and is a great addition to any paranormal lover’s library.

Posted by Siren Book Reviews at 11:38 AM