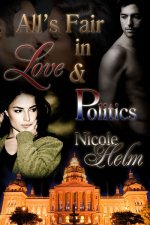 When sexy reporter Doug Kapshaw shows up on Abigail Fortman's doorstep to cover her state senate campaign, Abigail knows to keep her guard up. Doug's not after her story. He’s after an expose on Abigail’s U.S Senator father. Though Abigail’s relationship with her father is tense at best, she’s not going to be the pawn that brings Grant Fortman down.

Despite his assignment to use Abby, Doug can’t help but be attracted to her mix of strength and vulnerability. When Grant gets Doug fired, Abby is ready to take a stand against her father. Working together to bring Grant down, Doug and Abby can no longer fight the attraction between them. Attraction turns into much more, but while the secrets they uncover promise to revive Doug’s career, the ugly truth about her father poses the biggest challenge to Doug and Abby living happily ever after.

Lies, cover ups, scandal....yes, there's so much of that going around, and it certainly doesn't stop with Doug.  But things are going to take an interesting turn when his attraction comes front and center with what he's trying to accomplish.

All's Fair in Love and Politics is what you'd expect with a title such as this- plenty of things going around.  Doug and Abby are in the middle of a war it seems, and the only way to get out is to 'fess up.  Or is it?

I wasn't too keen on the idea of Doug “using” Abby.  It bothered me some, but then as time went on and his feelings surfaced, I wasn't as upset with him.  It did make a good story, and he became redeemable.

Nicole Helm pens a good contemporary story with this book, and it is pretty enjoyable.