Maxine Mansfield, Touched By The Magic 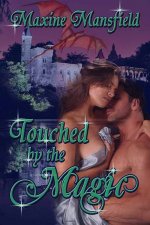 Title:  Touched By The Magic
Author:  Maxine Mansfield
Rating:  Four And A Half Siren Stones


New to The Academy of Magical Arts, Briarlarn Tumbleweed wants to learn the art of a True Healer, but her nerves get the best of her when she’s paired in the sexually dynamic healing class with Uthiel Stoutheart, Paladin of the Realm. Between burning off his eyebrows and overturning a candle on certain exposed male parts, she isn't making a very good impression. But how can she focus when Uthiel is strong, brave, and touches Briar in a way that leaves her weak in the knees, quivering with pleasure, and begging for more?


Falling in love with the accident-prone but talented Briar was not what Uthiel had planned, but life with the sexy healer is adventurous, hilarious, mind-blowingly stimulating, and clearly his destiny. His soul awakens while taking her to new heights of ecstasy, yet he can't allow his own pleasure. There’s no getting around it—he must leave The Academy and pursue his quest to right the wrongs done to his people if he can ever hope to find happiness with Briar.

But is their love strong enough to mend the magic so desperately needed to preserve their world, and that touches both their souls with a searing heat?


Briar, has a secret, in a world where most much younger than her have received training in the arts of love, she is without an education.  Worse yet she has lied on a school application for a job that requires said training.  Uthiel also, has his issues.  He is a paladin, sworn to protect dragons, which he is determined to kill due to previous heartache.  Together, they manage to botch almost every lesson the school of magic has to teach, while managing to save the world.

And if that isn't amusing enough for you, throughout the book are cameos by a perverted, potty mouthed gnome who likes to steal woman's underwear for the blow up sex doll he carries with him almost everywhere.  If you are looking for some lighthearted fantasy, with hot sex scenes, this is the book for you!
Posted by Siren Book Reviews at 7:58 AM