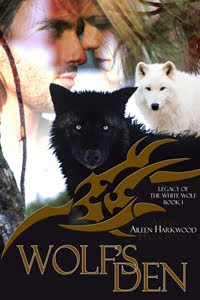 He blinked, astonished by this statement and apparently at a loss for words. It was, she had to admit, the single cheesiest thing she’d ever said aloud. She watched him trying to figure out how best to react, while at the same time maintaining that stern, “we aren’t going to have sex, no-way, no-how” attitude.

The longer they looked at one another without saying anything, the harder it was to keep a straight face. She couldn’t say who broke under pressure first, but suddenly both of them were laughing uncontrollably. She collapsed forward in hysterics, her forehead dropping against his chest.

Where do I start?

In a world intentionally kept separate from our own, the Kith, wolf shape-shifters, mate for life like all wolves do. So what happens when that partnership is divided by death?

The internal struggle the hero goes through being attracted to the person who has, to all intents and purposes, just murdered his potential mate in cold blood, and the self loathing those feelings produce is felt acutely by this reader. This empathy is mirrored in the confusion and revulsion the murderer feels upon seeing what they have done to another living creature. So why on earth would they ever be attracted to each other, even just sexually?

Add to this mix the possessive human ex-lover, hell bent on seeing them both dead, and the result is a high paced, adrenaline fueled battle for survival.

This is a really great book. A well written and well edited page turner. Even though you kind of think you sort of know what might be going on as you read it, it really doesn’t give too much away at the beginning.

The subtitle, Legacy of the White Wolf Book One suggests a great start to this series, and I can’t wait to read the rest!

Posted by Siren Book Reviews at 11:09 AM