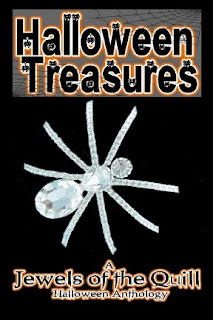 The Scarecrow and Ms. Moon {paranormal romance} by Barbara Raffin (Dame Jade): Never make a witch mad. Jackson Wolfe did and he’s now a scarecrow in her garden. Jessie Moon doesn’t like liars and, in a fit of anger, turned the man she loves into a scarecrow. Now, four months later, she’s exhausted every spell to restore him, been put on probation by her coven, and is still angry at Jackson for lying to her. On All Hallows Eve, the coven assembles at Jessie’s house to restore Jackson to his living, human form at the stroke of midnight. What Jessie doesn’t realize is that this is a test for her—a test that will determine whether or not she will be allowed to remain in the coven. Since impulsive anger is this novice witch’s problem, Jessie is given the twenty-four hours of Halloween in which to learn to control her anger and love Jackson enough to let him go or to lose her place in the coven. As if that wasn’t enough, if she fails, not only will she be cast out of the coven, but Jackson will be turned back into a scarecrow...forever. Cuddly {horror} by Dee Lloyd (Dame Aquamarine): Sam Farber heads for a neighborhood bar after a particularly grueling shift in the emergency room. This Halloween had brought out all the crazies. He’d spent hours dealing with the bloody aftermath of a gun battle between two teenaged gangs. All he wants is an hour or two of warmth and companionship. He gets more than he’s looking for. Paper Tiger (Kaleidoscope Series, Book 5) by Karen Wiesner (Dame Amethyst) {romantic suspense}: Kaleidoscope Office Building provides employment to nine hot, young singles—all about to make a love connection. Working 9 to 5 has never been so complicated…or so much fun! Billy LaPointe’s wife died only a couple years after they married, leaving him with a son to raise on his own. Nine years later, he’s found love again with Veronica Spencer and his teenage son Damian is just as smitten with her. But after years of hearing Roni hedge on his marriage proposals, Billy is desperate. Determined to make her his forever, he offers her an ultimatum that he soon regrets. What he doesn’t know is that Roni has a secret past she doesn’t want to look back and confront—a past that may have come back to haunt her. Can she risk losing Billy and Damian because of what could be a true threat…or merely a paper tiger? The Charmer (North of Nonesuch Series, Book 9) {romantic horror} by Jane Toombs (Dame Turquoise): Who is the charmer and who the charmed? A very difficult distinction to make. If Will Pasanen fails to solve the problem, more than his love for Lily Fowler is doomed... Mistress of the Shadow Hounds {paranormal romance} by Margaret L. Carter (Dame Onyx): A sinister artifact handed down in her family forces a young woman into conflict with creatures from an alien dimension that threaten not only her life but the safety of the entire world.

Whether you prefer a little more banter in your romance (The Scarecrow and Ms Moon), or something more ‘straightforward’, the eclectic mix of author voices makes this anthology a good read.

Some ‘traditional’ horror tales have been modernised and updated with a refreshing energy (The Charmer), while others warn the reader to Be Careful What They Wish For…. Lest they actually get it.

None of the tales were overly graphic in either the horror department or bedroom antics for my taste, and I enjoyed the balance that all the authors struck between these two aspects. This is more a read for those who like their romance with a Small Side-Order of Scare, rather than all out blood, guts and no-hope-of-ever-sleeping-again.

I wasn’t overly drawn to the cover art, and I did find the electronic layout a little odd at first. It’s probably more suited to paperback, but on the whole each story flowed easily, and they all fit well together without merging into each other. As with all books of this type, I preferred some stories to others, but the overall experience was none the worse for that.