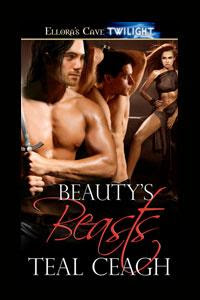 Author: Teal Ceagh
Rating: Four And A Half Siren Stones

Riley Carson Connors is yanked out of Pittsburgh and coaxed to New York by two tall, sexy strangers. Nicholas and Damian are the only people in the world who know anything about her mother and father, and what they know is terrifying. She must face a powerful enemy who killed both her parents, who were the best at what they did.

But it seems to involve driving her out of her mind with the sort of pleasure only a centuries-old lover would know how to give.

Beauty’s Beasts is a great story with interesting characters. Teal Ceagh’s vampires are different in this story, for they are not so focused on bloodlust. Rather, they are more focused on everyday relationship problems that the century’s old vampire might encounter. It was refreshing to see the more “humanistic” characteristics show through in these vampires.

While Riley trains to become the demon hunter she was always meant to be, Damian puts his plans into motion. Through Damian’s machinations and intrigue, the plot takes some unusual turns. As a reader, I couldn’t wait to find out how this story would end.

In between the training and intrigue, the relationship between Riley, Nick, and Damian starts to take shape. The sex scenes are descriptive and sensual, not to mention hot and steamy.

Beauty’s Beasts ends, but it feels unfinished. Teal Ceagh leaves the story with the potential for a sequel, which would be welcomed!

Thank you for your kind words about BEAUTY'S BEASTS and the wonderful review.

You're welcome! Keep the stories coming!