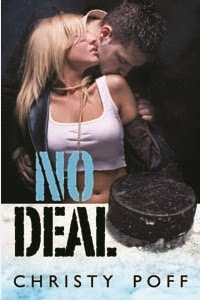 Alicia lived with a man who used her to further his legitimate financial climb in the corporate world. Every day she hated him more. Blake spent a cool million to get to know her for one evening. Will their love grow into a win/win result? Or will it be no deal?

Though this is stated as a romantic suspense, No Deal is not the traditional romance book type. The heroine starts out married, though in a loveless, abusive relationship. When Blake, the hero of the story places a bid on Alicia in an auction for a night, that's when things begin.

Her husband is a deceitful, hateful man who means to only get what he wants from his wife and that's her money. Blake and Alicia are now in a dangerous game against her husband.

I found this to be a very fast paced all around good read. There's plenty of action and suspense and hardly was there a scene that slowed the book down. There were a few formatting and editing issues, but they did not take away from the story too much.

I am interested in other tales by Christy Poff.