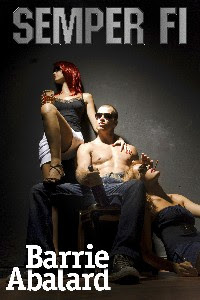 In this uncertain world full of lies and deceit, who doesn’t long for a mate that embodies solid values? Who doesn’t want a friend you can trust?

Jake Stone is searching for a woman whose values match his, a woman who will be Semper Fi—always faithful. When he walks into a bar one night to propose to his fiancée, he has no idea that he’ll be going home with two women he’s never met before.

Connie Woods has a thing for Marines, so both Jake’s looks and personal code draw her. She and her best friend, Amanda Foster, decide to spend a wild night in a hot ménage with Jake, determined to cheer him up after he is stood up and two-timed by the woman he planned to marry.

But a non-ménage sexual encounter with Amanda, and an upsetting first date with Jake, makes Connie think she’s lost both of them. Meanwhile, Amanda is hurt that her best friend won’t talk to her about what happened between them. And, Jake thinks he’s screwed up his chances with Connie. Can each of them find the love and happiness they are seeking?

Semper Fi, all about finding faithfulness and friendship in our uncertain world, reassures us that values still matter.

Semper Fi is a good story. It is short so the relationship progression felt a little rushed. Although the sex scenes are still hot and steamy.

There is a lot going on in Semper Fi so the plot keeps you turning the pages. The relationship between Amanda, Connie and Jake is complicated at first, but we journey with them as they sort it all out.

This is a tale about people coming to terms with what they are really looking for in a relationship based on past experiences. Each character’s past significantly affected their future relationships, so I wish they had been elaborated on just a bit more. With this story we are getting a brief glimpse of what shaped each character.

Semper Fi leaves you with a happy ending.