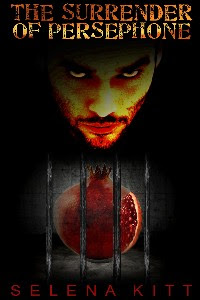 Sheltered Persephone, Goddess of Spring, never gets to do anything— thanks to the suffocating love of her mother, Demeter. Sephie is being carefully groomed to follow in the footsteps of the two “virgin” goddesses, Athena and Artemis, and while they sure do have a lot of fun together, she longs for something deeper—and darker. When Aidon, the God of the Underworld—generally known as Hades—appears in his chariot to claim Persephone for his bride, the young goddess gets more than she wished for.

Held captive in the Underworld, she suddenly longs to return to the safety and security of her mother’s protection, but the dark and commanding Aidon binds her to him, claiming her bit by glorious bit as his own. Her coming of age is one of sexual awakening as she learns the bondage her new master imposes fulfills her darkest desires. Persephone finds herself submitting to and obeying Aidon’s command and discovers being taken and consumed in the heat of passion by a man—a god—is what she was truly made for. Persephone can’t deny her own nature, or her growing feelings for Aidon, as she submits to his domination and surrenders as his wife and prepares to rule as his Queen.

As she finally admits her own feelings, Persephone faces the looming specter of her history, which threatens to shatter the newly formed bonds between the couple. She must now face not only her past, but her present, and her future—no longer only the Goddess of Spring, but also as the wife of Aidon and Queen of the Underworld—and the choices she will be forced to make will change the world forever.

Warning, this read is white hot! Scorching. Please read with a misting fan close by. I was thoroughly entranced by this fantastic read!

I felt for Persephone in her change of circumstance and shuddered at the thought of being underground surrounded by death. What a captivating picture of two diverse worlds.

Ms. Kitt held my attention with this read, a woman finding herself and her needs and a man caring for and helping his wife accept herself, and the world awaiting her position as their Queen.