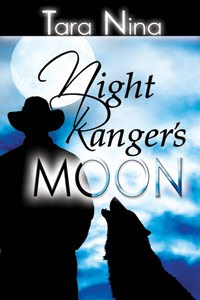 Weylin Anthropos is a Lykoian with anger issues and a demon in his past that haunts his soul. He’s a Night Ranger, one of the elite protector’s of the Lykoian clans. Without the backing of the council, Weylin sets out to find his brother. The trail leads him to Mississippi and a village that many Lykoians would rather forget. Ghosts of the past linger on these hallowed grounds but are disturbed by an intruder…an enemy from his ancestry. One he must face and defeat if he is to survive and find his brother.

Long and lethal, a charcoal gray wolf from an unfamiliar clan interferes in his surveillance. Her presence toys with his mind, body, and soul. Where did she come from? How did she find him? And most of all, what did she want?

Following another brother from the Anthropos family of werewolves, Night Ranger's Moon concentrates on Weylin, and his mission to find his youngest brother, Nick, who has gone missing while on a mission, set by the pack Council.

The first half the book is essentially a romance story; and Tara pitches the growing attraction between Weylin and Zeva at the right level. Neither character is at a place in their lives where they want a soul mate, let alone have it interfere with their respective missions.

As always, that true twin flame attraction wins out and together they face the threat of Leopold, one they believed to have been neutralized years before. The love scenes between the two as they come to terms with their new found bond are highly intimate, but not overtly coarse or crude.

The second half of the story further explores Leopold’s drive for survival, and the interbred abomination he seems to have become, half vampire, half werewolf, all twisted. Although the two ‘halves’ of the story deal with different aspect of the whole, there is enough intertwining to make the story flow, and at no point did I feel like they were disjointed.

I’d be happy to read other books in this series.

Posted by Siren Book Reviews at 11:36 AM