Cassandra Carr, Talk to Me 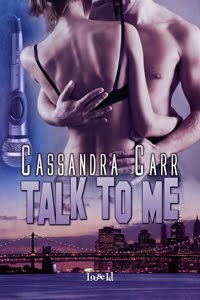 Title: Talk to Me

Radio producer Jamie MacMahon is in over her head with ex-hockey player-turned host Drew Milan. She’s attracted to the man who earned the nickname “the Beast” during his playing days from the moment they meet, but he’s her boss and she loves her new job. She’s made plenty of mistakes with men and loathes the thought of being yet another plaything for Drew, a man who sleeps with women but doesn’t date them.

Drew doesn’t want to lose a great producer and knows Jamie deserves a real relationship, but can’t stay away from the sizzling chemistry they create every time they’re together. Jamie’s insecurities and the very real prospect of having to leave a great job if this thing doesn’t work out clash hard with Drew’s fears about opening his heart and the possibility of losing his first competent producer. Nothing's going to get resolved if one of them won't say it: "Come on, baby, talk to me."

Talk to Me by Cassandra Carr was a delightful read. I loved Jamie and her star struck composure in the beginning. Drew was definitely fantasizing material. When he came into play…pun not intended. I giggled at her compromising position for their introduction to each other. From there Drew was hooked. I felt for Jaime because it seemed she wore her heart on her sleeve and deserved more than what appeared to be going on off business hours. I only hoped Drew would get it together.

Drew exuded magnetism like moths to the flame. Hurt from the past he turned to the bachelor womanizing ways. I was pleased as punch when Jaime knocked him off his game and he began second guessing his decisions. The passion sparked between them as their relationship grew to new levels. Dirty talk and kink added another level of enjoyment to these two characters. All in all a very good read for the evening, and one to pick up again.