Gabriel Daemon, A Glimpse Beyond the Veil 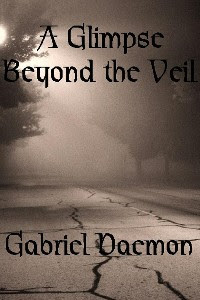 Title: A Glimpse Beyond the Veil

We've all known those people who seemed a little strange, a little weird. Your third-grade teacher. The old man down the street. People you were sure just couldn't have been human.

A believer in the potentials of the unknown, Dr. Kyle Perrin – fringe anthropologist, traveler, and theorist – never expected to be given the opportunity to explore that unknown directly. But when a detective asks for his advice regarding a mysterious pair of coins found in the eyes of a weeks-dead corpse, he becomes hurled into a waking nightmare, guided by a stoic former Army ranger and an enigmatic benefactor. What begins as a grisly investigation becomes personal once Gina, Dr. Perrin's street-walking lover, gets entangled in the mire, hurtling them all toward a nail biting showdown.

Warnings: This title includes the use of dark magic, dealing with the undead, and prostitution.

A Glimpse Beyond the Veil is an interesting adult version of a Spiderwick styled tale. While the summary does mention many other-worldly creatures, this tale actually only deals with zombies and the individual animating them. Gabriel Daemon's story seems as though it may be the first instalment in a future series of tales about Dr. Kyle Perrin's adventures with the group known as the Veil Society.

A Glimpse Beyond the Veil would then become Kyle's first indoctrination into the Veil Society and the beings from the other side of the veil. I do not know if that is the case, but I did get that feel while reading this story.

On its own, this is an interesting tale. Due to Dr. Perrin's loss of an arm 10 years before, he only feels comfortable at this stage in his life visiting hookers. By the end of the story, he seems to have found his confidence and moved on. The tale ends with his evolution from a somewhat sad professor into a man who may become a team leader for the Veil Society.

I did feel that a deeper explanation was required for the opening chapter when Kyle loses his arm. There is mention at that time that he is a follower of his current professor's indoctrination. Also that society feels his current professor is a crackpot. Then there is the accident in the amazing domed chamber during which his professor seems to die. No clear explanation is made about what it is that Kyle and the professor were trying to prove and no further mention is made about the wondrous domed cave or possibly the creature that may or may not have been in it.

Aside from that, the story was well written and enjoyable. The opening to what may become a series of tales about a team that protects unknowing humans from the dangers of the supernatural. I would say this is a “get to know the man” before he actually becomes The Man story. A Glimpse Beyond the Veil was an easy read and I would recommend it to fans of the supernatural. Enjoy.
Posted by Siren Book Reviews at 7:52 PM