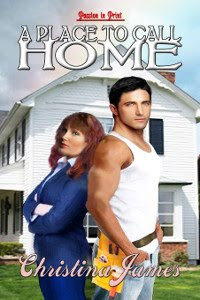 Title: A Place To Call Home

Tagline: Feisty businesswoman. Hunky handyman. Can they risk their hearts?

Dangling precariously from a ceiling, Hannah O'Leary never expects her rescuer to be so gorgeous...or so irritating. She's always focused on her restaurants and is overwhelmed by her attraction. When she realizes he can give her the family she's yearned for, can she stop running and set down roots? His first marriage a disaster, Austin "Mac" MacDevin has given up on love. He's not prepared for the lust that feisty Hannah ignites in him. Can he work with the saucy redhead and build a place to call home? In the end, it comes down to a battle of wills.

A Place To Call Home is a romance about second chances, and finding love when and where you least expect it.

Hannah O'Leary. She's a stubborn spitfire of a woman who lives to depend on no one. Yet, Mac seems to be saving her from herself lately. Hannah's character drove me crazy quite often. She'd go from a nice woman, to a spoiled, childish woman at times. I didn't know what to think of her quite often.

Mac is a divorced father and an honest man. Something about being around Hannah had him acting childish a few times himself, but for the most part I enjoyed his character. In the beginning, when he first meets and helps Hannah out, I thought he was a bit rude. But then again, Hannah wasn't acting nice herself.

Once you get past the love/hate relation between the two, the story turned out pretty good. There are moments where I wanted to slap one or the other, but it all worked out in the end. I liked the idea of this story and would check out other titles by Christina James.