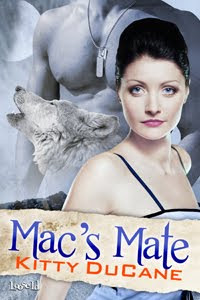 DEA Special Agent Mac McNamara knew this mission was doomed when his crippled helicopter crash landed in the suspect’s front yard. The mission was simple. Gather intel on suspect Callie Johnson and make an arrest. A tip said that a large shipment of drugs was coming from Mexico to Texas via her 500 acres, but Ms. Johnson wasn’t your typical drug smuggler. She’s Mac’s mate.

When Callie disappears, Mac wonders if she fled or if something bad has happened to her. Either way, Mac’s torn between doing his job and claiming Callie. He’s just got to find her first.

Wowza! Mac’s Mate by Kitty DuCane is one hot read…and perfect for relaxing on the porch with the breeze to give a constant cool down. I simply adored Callie and her no nonsense ways. I love grit with heroines and she had the entire package even though not Barbie sized. Let me tell you how much I love reading about the women who are bigger and not just in size but in everything they do.

I hated what her ex did to her, the emotional abuse she’d endured to make her feel less than perfect. Thankfully she wasn’t too shy and allowed the sexiest man for her to give her what she needed…what they both needed.

Mac he tickled me. His authoritative mannerisms and how he commanded everyone didn’t make for an easy like. He came off hard as steel and unyielding…and then another side of him emerged. Maybe because she didn’t cower for him or because his wolf demanded he open his eyes. Either way it was a great ride watching them unfold between the secrecy and violence erupting around them.

When he let his beast out to exact revenge I was hooked line and sinker…hoping he’d realize what he had and found it foolish to slip from his grasp. I loved the team and T-bone and can’t wait for more of these memorable characters to come to life.