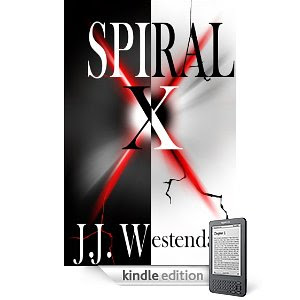 Cheryl Erikson is a Vampire Hunter with a problem. A dangerous new drug named Plast has found its way onto the streets of Dallas. She would prefer to let the DEA and local law enforcement handle everything, but since the dealers also happen to be vampires, she has no choice but to step in and put a stop to it. With the help of her best friend Virgil and a fellow Hunter named Tank, Cheryl must work to eradicate Plast from the streets of Dallas. It's a task that becomes more difficult as she comes under the gun, quite literally, from a contract out on her head. Coupled with a nosy police detective looking to peg her for a triple homicide, and a sudden interest in her activities from a powerful vampire recently arrived in the area, it's enough to force her to accept help from the least likely of sources, a mysterious Hunter named Rev. Through him, everything she thinks she knows, and everything she stands for, is challenged in ways she never imagined.

Spiral X is a very well written story in the vampire hunter genre. The vamps in question are not sparkly little boyfriend types but instead blood drinkers bent on re-asserting their position at the top of the food chain. In a slightly different twist from the normal undead vamps that we are used to, this version of a vampire is possessed of a demonic spirit which entered the victims near/at death, otherwise they are very like the typical evil vamps of literature.

Cheryl Erikson is the main vampire hunter that this story focuses on; however, we do meet a few more including government types throughout the course of the tale. Cheryl is spoiled rich kid that has no need to work, due to an inheritance, and at night she hunts the vampires vigilante style as revenge for the death of her father. This story is well written and entertaining even in the face of hundreds of other vampire tales. It has some mysteries within it which remain unanswered hinting that a series could be in the future. The characters of Cheryl and her trusty cyber-sidekick Virgil are nicely developed and well supported by the characters of Tank and Father Harold. Together they make a wonderful vampire hunting team that could, in fact, make a lovely TV series.

With tons of action from beginning to end, this is a book that fans of the vampire lore will thrill to consume.

Posted by Siren Book Reviews at 5:01 AM