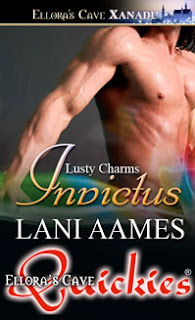 Serena Blackstone, a non-magickal mundane, is the new librarian at Strange Castle. Irresistibly drawn to the dark and dangerous Dungeon Master, Invictus Cross, Serena sets out to seduce him.

Invictus Cross takes her up on her invitation with the intent of discouraging the sexy mundane. She shouldn't be at Strange Castle and she shouldn't be with him. His dark past is sure to come back to haunt him and he doesn't want Serena caught in the crossfire.

Serena is shocked by Invictus' sexual demands, but rallies to the challenge. After all, her enchanted robe has revealed that Invictus Cross is her one true love. And for that, she'll put herself at his mercy…

Lusty Charms: Invictus is a short story about D/s with some magic weaved into the story. Invictus Cross is the hero of the story and the dominant one. Serena is the heroine and, unknown to her, submissive. The author, Lani Aames, gives us some background information on both characters and tells us how they came to be in the same place.

This is a well written story, but I have to say I was a little disappointed that it ended so abruptly. There is quite a build up around the evil DeMonica, but nothing ever comes to fruition regarding this character. What happened to that part of the plot? I also really want to know, what’s going to happen in the dungeon the next night? What is in store for Serena when she enters Invictus’ world on his own turf? Maybe some of these questions will be answered in a following story.

In spite of my questions, this was a fun story to read and it held my attention from beginning to end. I would check out other works by Lani Aames.