Louisa Trent, The Outlaw of Ironguard 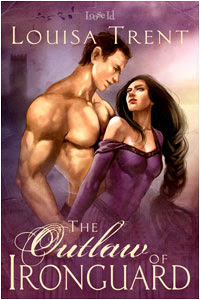 Title: The Outlaw of Ironguard

Previous Book: The Devil of Nettlewood

No apology, Ysenda loves cock. Upon occasion, she even loves the man attached. For a night, and not an eventide more. Not that she’s fickle or fussy. Nay! Just the opposite. Any lover will do her. Including Almaric, the thieving wizard who seduces then abandons her. And Talon, the murderous overlord who killed her sister, Mitri. See? Not fickle or fussy at all. At eight and ten, she had her way with a fine strapping farmer and never once looked back since. To satisfy a yen to mate, she’d pull a lad on and push him off when she was done, then send him on his merry way, uncaring what became of him. Easy cum, easy go -- that was just the way coupling went.

Until she ambushes Almaric the Wizard on the moors and then schemes her way into Lord Talon’s solar at his keep. Whilst the magician’s desertion breaks her heart and the overlord’s dominance pains her other places, she falls in love with the thieving and murderous bastards despite herself. A quandary. No matter. Revenge is sweet and ‘tis hers for the taking --

All she needs do is betray one Outlaw of Ironguard and assassinate the other.

The Outlaw of Ironguard by Louisa Trent was a delightful read. Ysenda captured my attention from the get go and Almaric/Lord Talon had me wanting to find out why he was masquerading in the first place. I thoroughly enjoyed the lay of the land and the setting of this story. Ysenda a strong woman clearly had an agenda of her own. I loved her duplicity in attempting to gain justice by her own means, showed bravery and a strong constitution.

Lord Talon was great. I loved the emasculated side of him versus the alter ego side that had no issues in the bedchambers. It was great to see the two separate parts of him emerge into one and to see the sparks fly between he and Ysenda. I thought it clever that she didn’t see through the ruse at all. Adding in his bailiff was great and I enjoyed all the aspects of submission and domination. This story was filled with humour, intrigue, suspense and white hot sensuality.