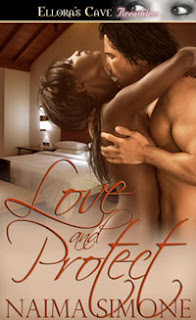 Ex-DEA agent Erin Montgomery is reluctantly back on the job, posing as the sex-kitten groupie girlfriend of rock star Sean Ledger. She’ll be joining his band’s tour to try to catch an obsessed, dangerous fan. Tormented by nightmares of her failed last assignment, Erin’s not exactly eager to be drawn back into the fray. But once she meets Sean, all rocker, all man and dripping with raw sex appeal, she knows she’s right where she belongs.

Sean is reluctant to have someone investigating his crew, but when he meets Erin, his objections fly out the window. The beautiful, hard-bitten agent turns him on like no other woman ever has. Sean’s caught glimpses of the fiery passion lurking under Erin’s cool front and he’s determined to break through her hard exterior and make her his.

But Sean’s stalker is still at large and she’s made it clear she’s willing to stop at nothing—even murder—to get him.

What woman wouldn't want the job of going undercover, posing as a rock stars’ girlfriend? Erin, that's who. But her time off has come to an end after a tragedy, and she can't let her friend down.

Sean hides behind his music; he's a dark soul with his own tormented past. He uses music and sex to escape reality, but now someone is after him, damaging his things and threatening his life. He's not really sure what Erin can do, but he is sure that his attraction to her is intense, and that he wants her, needs her in his bed and eventually in his heart.