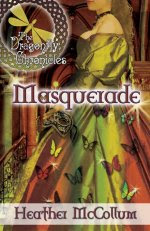 Orphanage director by day, jewel thief by night. Using her magic to rob from the rich to keep the orphanage running seems like the perfect solution until Kat steals from the wrong man, a man who sees through her magic, a man who can see the scars she hides from the world.

Toren MacCallum is cursed. An old witch tore him from his sixteenth century world and threw him into the twenty-first century. But he’s found an ancient dragonfly necklace to bait the witch to return him to his time. For he must find a way home to save his sister and his clan from disappearing off the pages of history.

When a mysterious woman steals the necklace in front of a hundred witnesses, the witch, followed by a storm of demons, sends Kat and him to Elizabethan England. Toren agrees to return the necklace, but he won’t give up the greater prize, the thief who’s stolen his heart.

Being of Scottish descent and actually descended from clan MacCallum, I chose to review this book for purely selfish reasons. I felt it would be interesting to read a romance based upon my own clan instead of say, the time traveling Frasers, and yes, I've read those too. Having said that, I truly enjoyed this story!

A time traveling witch, who does not know she's from possibly a thousand or more years ago, who is also a cat burglar with a robin hood complex, meets a time traveling Laird of a beleaguered Elizabethan Scottish clan, while trying to abscond with his magic necklace. Through the efforts of the spirit of another deceased witch they are tossed back and forth through time to avoid an evil that is out to steal Kat's powers and destroy the world.

This appears to be the third instalment in a series, which I only became aware of when Ms. McCollum introduced the other two sisters and they had already found their mates. Being a third book made absolutely no difference to the story, although I believe I would have enjoyed it even more had I read the first two first. There will, I think be a forth book as Kat has a “missing” twin sister. It was also alluded to that there is an unknown fifth brother or sister out there that even the helpful dragonfly witch spirit seemed ignorant of.

This book was very well written and engaging. This is the kind of tale that won't allow you to put the book down. It will keep you up late into the wee hours with red eyes until you've turned the final page. You will love it!!