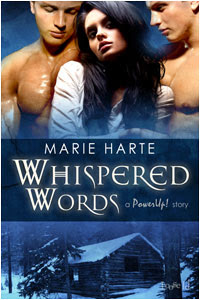 A casualty of funding wars and an overzealous Defense Department trying to clean up its reputation after several failed experimental programs, the Psychic Warfare Program (PWP) is scrapped in its infancy. Its participants are transferred to other defense agencies, but a few decide to leave the government behind, knowing full well their freedom hinges on keeping a low profile and living under the radar.

Chloe King has worked for the government ever since she left college. First as a cop, then as an agent, she's been putting away the bad guys for more than ten years. A clairaudient who’s always been able to escape trouble at the last minute, she’s now part of a group of people who understand what it means to be different, but now she's with a private organization, without the government's protection. She should be working less dangerous cases, trying to retrieve paranormal objects gone missing. Yet her luck has taken a turn for the worse.

She’s just getting over being nearly murdered by a serial killer when a stalker nearly brings her down. The voices she’s heard more than half her life have disappeared, and she’s afraid her life is coming to an end. If she can’t hear those voices again, she’ll die. She can feel it. But she never counted on the voices being real. Or belonging to two strong, sexy men resolved to keep her for themselves.

Whispered Words: A Power Up! Story by Marie Harte led me once again into the PWP world. Chloe finds she must leave on hiatus to find her voices, the ones that have quieted while formulating a plan to stay one step ahead of a stalker trying his best to assassinate her.

During her travel she runs into two men who’ve helped her before, Xavier and Josh. Attraction is at an all-time high and Chloe finds she craves both powerful men. Keeping passion locked away proves impossible. Xavier and Josh consume her thoughts, and she theirs as well and not in just a ‘psychic’ way.

Josh needs more than a bedroom affair. Though he and his brother have shared passion before, he wants the illusive, a woman who will take the both of them for life, a pipe dream. Xavier wants Chloe as well; he isn’t as guarded as his brother. While their emotions and sexual tension continue to build, a psychopath is still on the loose. They must embrace their powers and give into the need to bring him down for good. This was one fantastically written story and I can’t wait to read Nathan’s story.
Posted by Siren Book Reviews at 4:12 PM