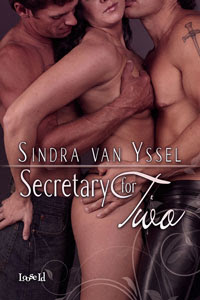 Executive assistant Nicole Kerrigan has been in love with her boss, idealistic genius Austin Summers, since she first saw him. She has no idea he's fallen for her just as hard. Or that when Austin needs to be two places at once, his identical twin brother Tony steps into help. Tony's a hardboiled private eye who doesn't have qualms about sleeping with his secretary-- or his brother's -- and makes the move on Nicole that Austin didn't dare make. But when a hit man tries to take out Austin, she rushes to his side, and deception gets piled on top of deception.

Now Nicole is torn between two very different men who happen to look exactly the same. Can the three of them unravel the half-truths they've told, and can a woman serve two masters? Nicole is about to find out.

A fun story of two twins switching places to accomplish a goal. However, one twin decides to up the stakes and takes what he wants. Now that he has it, can he give it up? Suspense and thrills with danger lurking, can their love survive?

Austin and Tony are great heroes. Twins but very different people. Their love for Nicole transcends their differences. After two years of working with Nicole, Austin knows he’s in love with her. It only takes Tony a day to act on what he feels.

Nicole has been pining for her boss so when Tony presents her with her fantasy she can’t help but follow his commands. She quickly realizes she’s a submissive and Tony helps Nicole live her dreams.