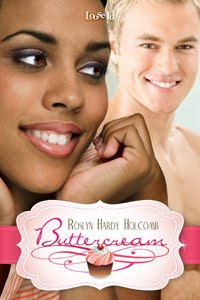 Like the sinfully decadent treats she whips up in her bakery, Poppy Blakemore is irresistible, even to a battle scarred warrior like Matthew McAlister. Unfortunately, except for a love for delicious pastry and a passion so hot it leaves them scorched in its wake, the two of them have nothing in common. He is a straight-as-an arrow helicopter pilot who has been traumatized by combat, while she struggles to reconcile her capitalist tendencies with her counter-culture background.

The passion between them is undeniable, but Poppy knows that anything more than a sexual relationship is out of the question. Matthew wants so much more. Are sex and buttercream going to be enough to hold them together, or is their love doomed like an overcooked madeleine?

Buttercream by Roslyn Hardy Holcomb gave me insight into the lives of a military pilot and a woman who was raised anti-war. Their passion moved mountains but their core values separated them on opposite sides. I loved the bakery and the ideals that Poppy stood for. At the same time, I also felt for Matthew and the honor he portrayed by protecting the freedom of every united states citizen…even poppy though she was lax to agree. Their sex burned white hot, the intimacy though was missing. Poppy couldn’t find it in herself to walk a mile in her lover’s shoes. In that regard she missed out on the blessings of the love he offered, simply because she didn’t have the same beliefs. I enjoyed the story but felt that there was an element missing. I didn’t get that they were in love with each other by end of the book. I saw the words spoken but with the pregnancy it felt calculated for purpose instead of heartfelt. I’d loved to have seen them have more emotional growth together and deeper intimacy. All in all it was a good story.