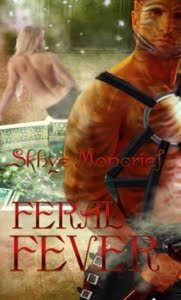 Blessed are those who just give into the darkness of Luvk... Earthling archaeologist Aisling Bjorn never really considered juggling multiple husbands for were-assassin duty on planet Luvk—a world of tiger folk subjugated by winged aliens--for a career. Her sanity is out of the question when surrounded by enormous muscled Tiger Lords cloaked in sexy leather pants. Their glorious bodies alone could incite riots on Earth. And they all want her. One thing’s for certain, love or lust, everyone eventually succumbs to Luvks’ FERAL FEVER. (Multiple sex partners)

Feral Fever is book three in a series. I had not read books one and two. While this book can be read as a standalone, and enjoyed, I am positive that it suffers somewhat from that. Read as a third book, I believe that I may have given it a higher rating. Much of the back story as to why Aisling Bjorn is a Marshall or even what a Marshall is, is missing in this story. Unlike many other books, there really isn't much of a re-hash on the back story to catch up anyone who had just happened to start with this book.

The story itself is excellent. It involves a matriarchal cast society with female domination over the males of their race. They are a humanoid race that have slightly furred faces and tiger stripes imbedded into their skin (tattoo like). The royal females, those with the palest markings, are queens and take up to fifty or more husbands if they wish. They are capable of having children for many years and often have 40 or more children themselves. Somehow most of these children turn out to be males, against all statistics. This produces many unattached warring males looking for mates. There is a sadness to this book.

Aisling is sent to this planet to become a royal queen as an ambassador from the Marshalls. She is forced to take a minimum of 7 husbands, one from each region, against her personal beliefs. With time she comes to embrace the five husbands who survive the warring planet. This story is not a ménage per se as she is only with one husband at a time, however different men may visit her in the same day. Each husband has his own baggage and traits so there is something for everyone in this story. Once you read past the opening story, this book is mostly about Aisling creating workable bonds with all of her husbands, so the heat level on this book is pretty high. If you are looking for a hot book, with multiple partners, all in one to one situations, this is the book that you should read.

Thank you! I just now found this review. :)