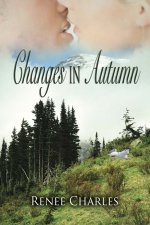 Ex-animal control officer, Autumn Reynolds always had a soft spot for injured animals. So when one shows up on her porch with a gunshot wound, she has no choice but to help it. But she gets caught in the maelstrom when the injured wolf turns out to be a hot werewolf and the shooter comes back to finish the job. Now she's going to become a wolf, or die trying. Fortunately, she now has her own Alpha-male who owes her one. However, Autumn fears if she does survive, she might lose her heart in the process.

Conner Grayson owes the beautiful woman his life and feels obligated to help her through her first change. Though he recognizes her as his mate, as her Alpha, he won’t deny Autumn the right to choose once she becomes a wolf. That is, if he can resist the overwhelming need to claim her as his own.

This was a sweet short story that I would recommend without reserve. The editing was good, some typos that were a bit confusing at points but nothing severe or that impeded reading comprehension.

The author took the time to develop the characters of Conner and Autumn so that the reader feels a connection to them; one can’t help but want a good outcome for them.  The conflict in the story begins with Conner’s cousin, Bear, and continues with Kelley, his mate.  The resolution of the conflict with Kelley came a bit too quickly for this reviewer, however, that speaks to the whole point for Autumn’s response to Kelley and the situation she finds herself in.

The story’s resolution also came too quickly for this reviewer.  I would have liked an epilogue set perhaps a year to two in the future to “tie the bow” on the story’s outcome.  But that just indicates that I wanted to read more and didn’t want to let go of these characters yet!
Posted by Siren Book Reviews at 1:17 PM