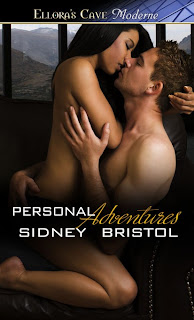 Carey’s had the hots for his best friend and outdoor adventures coworker Elise for two years, but the timing has never been right. Now they’re both single, and Carey wants to entice her into an adventure for just the two of them. In the bedroom, in the hot tub, under the beautiful Colorado sky…

Elise doesn’t buy into the idea of love, but lust she understands. Carey’s friendship is important, but a relationship doesn’t fit into Elise’s five-year plan. She isn’t looking to repeat her parents’ mistakes.

With secrets coming out from under every rock and desire unchecked, this adventure might make more than the water on their rafting trips rush.

Personal Adventures by Sidney Bristol is a great contemporary romance story.  Carey and Elise’s story had me laughing out loud one moment and in the next it was tugging at my heartstrings.  The secondary characters add depth and realism.

I loved the setting that the author chose and the beautiful cover helps set the mood.  I could see and smell the trees, mountains, and air, respectively.  The descriptions put me in the moment with the characters.

Carey and Elise knew each other in their business setting and from doing things together.  However, they didn’t know each other’s separate worlds and backgrounds and how hard it would be to try and merge them without understanding how they grew up.  We get to see this come to light as the story progresses.

There is a special bond that comes with being a best friend and with that the ability to talk about anything with each other.  Carey and Elise share this bond and it comes across in the story by making their love scenes even more special.  Their love scenes, of course, are hot and steamy, but then there is the added extra bonus of banter between the two.

Personal Adventures is a fun read and held my focus from beginning to end.  The characters are sweet and lasting and it had just the right amount of secrets and intrigue.  I would recommend this story to anyone that enjoys contemporary romance.