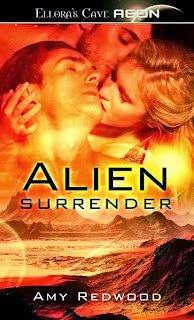 Jana is happy. After all, it's her wedding day, also known as the Joining of the Three. Her mates are two alien males who couldn't be more different. One is loving while the other has a cruel streak and dominates her in the bedroom. In love with one, in lust with the other, she expects to live the rest of her life in blissful ecstasy. If it weren't for an alien envy that threatens to destroy her relationship with her two mates.
Inside Scoop: Dominance and submission, pain that hurts so good, sexy aliens, threesomes and a loving relationship for a human girl who gets not one but hot TWO hot alien males.
A Romantica® Futuristic, ménage erotic romance from Ellora’s Cave

Alien Surrender is a wonderful sequel to Alien Best Man.  The story can definitely be read on its own, but either way as a sequel or standalone you won’t be disappointed.  In this story the author is able to develop the characters further and give us some insight as to how the three of them will work as a family unit.

Jana is human, now married to two Dezrian aliens, and living on their planet.  She is the only human on the whole planet and is feeling lonely, homesick, and out of place.  She is also unaware that her two husbands are dealing with issues of their own.

Zyn is Dezra’s King and Qay is Dezra’s elected ruler, but both are Jana’s husbands.  In this story we get to find out how each of the men deals with Jana and helping her assimilate to her new life.  There are plenty of insecurities for Jana and her men to overcome and each husband has his own approach.  The one thing that Zyn and Qay both have in common is their love for Jana.

The story sucked me in at the beginning and spit me out at the end wanting more of these characters.  It’s a page turner that will have you engrossed so that you don’t realize the end is coming.  It’s always sad when you are enjoying a good story and it has to end.  Hopefully there will be more about Jana, Zyn, and Qay in future books.
Posted by Siren Book Reviews at 1:16 PM