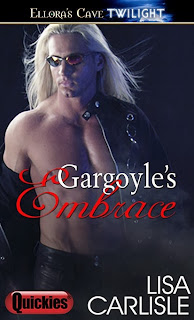 Fifth in the Underground Encounters series.

Tracy isn’t sure why she’s drawn to a particular gargoyle statue in the Goth club where she works. After the stone takes human form to protect her from her abusive ex, she brings the handsome, naked male to her apartment. It’s impossible to ignore the seductive appeal of a man sculpted like a Viking warrior.
Danton has only hours in human form to spend with the woman he has hungered for. He’s convinced what’s between them is more than hot sex, but he needs to convince Tracy of that before he turns back to stone.
A Romantica® paranormal erotic romance from Ellora’s Cave

Gargoyle’s Embrace is short and sweet with some dark drama to spice it up.  It is a short story so there is not a lot of time for character building or finding out more about Danton’s life as a gargoyle.  The story takes place over a period of less than forty-eight hours so the reader gets just a glimpse of Tracy’s life.

Tracy’s ex-boyfriend, Brian, is somewhat of a stalker.  Danton the gargoyle that Tracy meets at work feels it is his job to protect Tracy.  Herein the dark drama ensues with some surprising results.

Lisa Carlisle does a nice job of wrapping up the story and leaving the reader with a happy feeling, but still some unanswered questions.
Posted by Siren Book Reviews at 6:22 PM