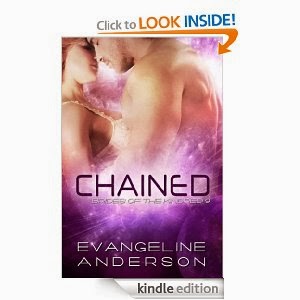 Maggie Jordan is not supposed to be having adventures. Her mission is to go to Gaia, a new, unpopulated world, and study the native life forms there. So how come she finds herself in on the female dominated Yonnie Six instead, rescuing a huge, muscular prisoner? The same prisoner she keeps seeing over and over again in her dreams…

Korexiroth—or Kor, as Maggie dubs him, is a slave who spent his life fighting in the savage arenas of the Blood Circuit. He’s got plenty of kills under his belt and more than enough reasons to run as soon as he gets free. But somehow he can’t make himself part from the girl who was brave enough to save him from certain death.

Now Maggie and Kor are on the run together, trying desperately to find someone to remove the alien device that was implanted in Maggie as punishment for her thievery of an expensive slave. The device, or “slut button” as it is called, forces Maggie to sexual excesses the shy scientist has never known before—and Kor is the only one who can help her control her new urges.

Kor is more than willing to help Maggie satisfy her new sexual hunger but his own appetites are not so easily satiated. For there is a dark secret, a shadow from his past that stalks him and whispers of power beyond belief if only he will give himself over to darkness.

Will they find a way to return Maggie to normal? Will Kor admit how he really feels for her? Or with the shadow from his past succeed is tearing them apart? You’ll have to read Chained, Brides of the Kindred 9, to find out.

Evangeline Anderson was correct in her author notes at the front of Chained; if you have not read her previous books then you will be a little lost reading book nine in her series.  For the most part you will be able to follow along, but some of the major plot points were set into motion in previous books.  There were also some editing issues or perhaps they were Amazon formatting problems, but nothing too bad that distracted from the main story.

That being said it was a great romantic, science fiction, fantasy story that readers of the Kindred series will not want to miss.  I found this story to be rather humorous and light-hearted considering the subject matter was a little dark and sadistic.  Killing, kidnapping, and sexual slavery was written in a compelling manner that, as a reader, had you engaged and rooting for the main characters.

Korexiroth and Maggie Jordan’s lives are linked by dreams that draw them together, but are forever entwined through acts of kindness.  Korexiroth is the ultimate alpha male or perfect Kindred.  He is protective, brave, kind, and self-sacrificing.  Maggie is independent, smart, and brave, but totally out of her element when dealing with aliens.  She’s a bit clumsy and accident prone, but loving and loyal to a fault.

The two of them have several adventures together that put both of them at risk for losing not only their hearts but their lives.  Each new hurdle or surprise that is put in front of this couple only seems to bring them closer.  Their sexual chemistry lights the pages on fire and keeps the reader turning the pages as fast as they can to see the final outcome, which was very gratifying.

As with her other books the author brings in secondary characters in the form of previous heroes and heroines in the Kindred series.  There are small updates for these characters as well as some setup for the next books.  If you plan on following along with the series then you do not want to miss this installment.