Brenna Lyons, All I Want for Christmas is You 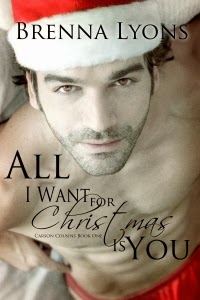 Title:  All I Want for Christmas is You
Author:  Brenna Lyons
Rating:  Five Siren Stones

Carson Cousins Book 1
Two years after losing her fiancé Zach in a car accident, Robin is moving on. She's set her priorities, and one of them is following through with a life plan she and Zach made together...having a baby. It would be best if said child shared some of Zach's genes. Enter David, Zach's older brother. He's Robin's best friend, her confidant, the one person who won't think she's crazy to do this...she hopes. Since there's no chance the ladies' man will fall for her, she hopes sex with him will stop the dreams where David takes Zach's place. It's the invitation he's been waiting for, three years of watching Robin with his little brother, then watching her grieve Zach. If only she wanted David for himself and not a convenient sperm donor to conceive his brother's child. Then again, in such close quarters, maybe he'll be able to convince her to something more permanent...if his parents don't catch wind of the whole thing first.

This was a fun story to read and watch unfold.  It’s hard not to like both the main characters, Robin and David.  The author brings them to life with believable backgrounds and insecurities.  Robin was engaged to David’s younger brother Zach.  Zach was killed in an accident that paralyzed Robin from moving forward.  While grieving, David was there for her as was Zach’s family.  When Robin decides she wants to have a baby and asks David to help her, David sees his chance to be with Robin.

All I Want for Christmas is You is a story with some deep emotions that still managed to be light-hearted and enjoyable to read.  The ending is both happy and hopeful for the future unfolding for Robin and David.
Posted by Siren Book Reviews at 9:47 PM