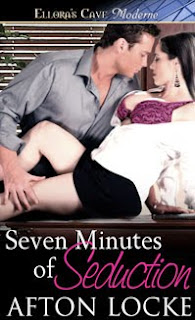 Despite Eliza Worth’s attraction to her boss, Zach Taunton, she’s so fed up with his unreasonable demands she’s decided to look for another job. Her matchmaking friend Margo, determined to give Eliza some sexual healing for her work stress, invites her to a singles mixer, where Eliza reluctantly agrees to play a game of Seven Minutes in Heaven.

In a dark closet, Eliza is quickly brought to the edge and beyond by a sexy mystery man. Her initial intrigue quickly turns to horror when she discovers her masterful, anonymous lover is none other than her slave-driving boss—and Zach seems to want her for a lot longer than seven minutes.

But first he’ll have to relinquish some control and negotiate his way into her heart.

Seven Minutes of Seduction by Afton Locke was a great, fun-filled read. Margo a manipulating genius coerced her friend Eliza to come to a play party with tons of naughty going on. It was blaringly apparent that Margo knew just what her friend needed and provided it for her.

After her seven minute stint in the closet Eliza’s world was rocked and she not only let go of the huge chip on her shoulder, but enjoyed herself. Where once she contemplated leaving her job, after the party and some down and dirty oral foreplay she reconsidered. With the edge off she had no issue telling her sexy boss just where he could stick it…only she learned things weren’t always as they seem and that he too had stressors as well.

I really enjoyed this short read!