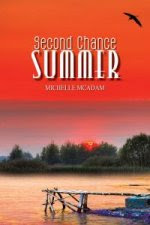 Sometimes second chances sneak up on you when you least expect them.

Nine years ago, Gabriel Fenton went to prison for a crime he didn't commit. Now he’s back in Alexandria Bay, New York and ready to tie up the loose ends of his former life—and the biggest of those is America’s sweetheart, Katie Parker. When Gabe disappeared, he left Katie heart-broken and pregnant. Forgiveness is going to be hard won. So what else can he do but put his complete and utter lack of carpentry skills to use pretending to play handyman on her private island? Of course, it's not the island that needs repairs; it's Katie's heart. But with the combination of his tainted past and her newly-acquired national fame, can they really afford to take a chance on love?

Second Chance Summer was a beautifully written story. My heart broke for Katie and all she’d suffered alone, and the public façade she put on to avoid coming to terms with her own personal tragedy. I felt her anger and her sorrow as if it was my own and her horror when she saw her one love again. A man who left her without a by your leave.

When Gabriel comes back, clearly he’s a haunted man, and while I wanted to hate him, I equally wanted to see why the heck he’d leave a woman as fantastic as Katie. His answers seemed vague and it became clear there was more than met the eye.

I wasn’t prepared for the upbringing of Gabe to show how come he made such a terrible decision, one where not only he lost but they lost. Worse I agreed with the volatile anger the heroine hit him with and the lashing out over her loss alone. I wanted him to make her better, to be her personal band-aid.

His idea of gaining entry into her life made me giggle and once again, I got to see why they must’ve fell in love so long ago. Time may heal all wounds, but it takes two to make the impossible happen. The optimist in me wanted a HEA; I had my doubts that a love could withstand so many obstacles. However, that’s what second chances are for, a chance to bet on what could’ve been if. This was one fantastic story.