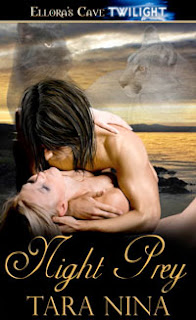 With unwanted lands thrust upon him by King George III, Alessandro Pantera feels caged. His nightly ritual of pacing the castle walls in panther form leads him into a fight to save a beautiful woman from harm. The moment he first sees her, first touches her, a raw, primal desire to claim her ignites within him. But a man such as he, the Black Knight, deserves no woman of his own.

Rescued from bandits, Rose Smythe lands in the arms of a male shapeshifter. As black panther and as man, he’s fierce and intimidating to all who cross his path. But not to Rose. His presence initiates her inner white panther’s need to mate—and her heart is set on Alessandro.

A heated night of passion neither can resist bonds them as eternal mates. A macabre twist of fate places Alessandro in the battle of his life. Kill or be killed in the fight to save his mate from the demon Mephistopheles, the creator of the darkness within his soul—the Black Knight.

Publisher’s Note: This story was previously published elsewhere and has been revised for Ellora’s Cave.

Night Prey by Tara Nina took me back in time. The action packed story kept me entertained. Alessandro was the perfect hero who thought himself unworthy and Rose the heroine perfect by her strength and constitution. Alessandro’s duty to protect at all costs endeared me, while I totally fell for his cousin Kade and his smarting retorts. I didn’t think Rose would show him her secret and I didn’t know that secret would be a major contributor later on. As the story moved on, I got a glimpse of the dark foreboding setting, and the darkness lurking in Alessandro’s mind.

The villain did a good job in creating limitless cliff-hangers where I had to know what was going to happen next. I only hoped Rose and Alessandro would get together and form a long lived future. The King’s last missive made me sniffle, for the measure of a man was shown in those endearing words from one not blood related.
Posted by Siren Book Reviews at 8:00 PM