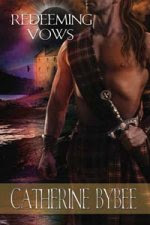 For her own safety, modern day, single mom, Lizzy McAllister is forced to bow to the medieval men who surround her when she’s thrust back in time to the sixteenth century against her will. When Lizzie finds herself trapped in time with Fin, the one man she finds both irresistible and maddening, she agrees to combine forces with him to rid Scotland of the evil witch, Grainna.

Finlay MacCoinnich’s attraction to Lizzie sizzles the very air they breathe. Tearing down the solid walls the woman has built around her won’t be easy, but he’s willing to do anything to keep her by his side. When a spell cast by their deadliest foe throws them forward in time, will they manage to find their way back in time to save their family from peril? And will Lizzy willingly stay in his time, or abandon him altogether?

Are you ready for the amazing next instalment in this breathtaking time travelling trilogy? When I first picked up a Catherine Bybee book, I was instantly hooked. The mix of time travel, witches, magic, and the power of falling in love grabbed me instantly. When I learned that there was more than one story, that it was part of a trilogy, I had to have it. And long awaited, this is Liz and Finn's story.

From book two, I knew that these two would have the most powerful story yet, and indeed they did. Do yourself a favor- pick up this book, in fact, pick up the entire trilogy. Clear your schedules for the next few days and get drawn in to the magic of travelling through time, finding your destiny, and fighting against a powerful witch that will stop at nothing to get her way. Redeeming Vows is enchanting, thrilling, the tension sizzles between Lizzie and Finn, and the book jumps with intense action. I suggest you not miss it!