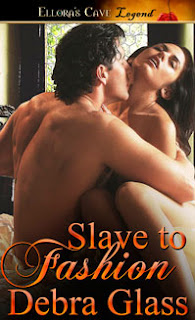 A taste of the forbidden…

Georgiana Talbot intends to remain a spinster in order to ensure her younger sisters debut and find husbands. But when she encounters a devilish Scot who ignites a searing fire within her, Georgiana realizes just how much she has denied herself regarding the pleasures of the flesh. Determined to learn more, she concocts a daring scheme.

A touch of the taboo…

Seducing the haute ton’s premier modiste into buying linen from his mills is foremost on Blane MacLaren’s mind. Until his need to bend the brash beauty to his will drives him to enter into a scandalous agreement—Georgiana will purchase his linens if he will tutor her in an array of dark delights and forbidden pleasures. Yet nothing could have prepared him for the effect his very willing student will have on him—or how far a harmless lesson in lust can go.

Slave to Fashion by Debra Glass led me on a delightful journey to the 1700’s. I’ve always wanted to be a part of the haute ton and found myself living vicariously through the heroine Georgiana Talbot. What a strong woman with a will of her own. I found it commendable that she took care of her family, taking over after the loss of a parent. Her wilfulness enchanted me. And Blane MacLaren is enough to make any woman of any time period simply melt. I found his manipulative ways genius and the grand strategy of chess begin to play out between Georgiana and Blane. I wondered whose will would prevail! Add in the secondary characters with tunnel vision, accusations, beautiful Scotland and sex so blatantly unabashed and the story makes for a must read more than once or twice.

I’ll be dreaming of highlander men with swarthy good looks and the decadent brogue that accompanies it. I can’t wait to travel back through time with another story by Debra Glass.

Posted by Siren Book Reviews at 9:35 AM

Thank you Cia!! Wow! I loved your review of Slave to Fashion and am thrilled you enjoyed it. If I do say so myself, Blane was sort out amazing. He just jumped off the page for me. :-) Thanks again!

Wow, what an awesome review. I can't wait to read the book. I just love the title and the cover too.

Awesome review! And I agree completely! I read Slave to Fashion and it is one of my favorite Debra Glass books to date. Georgina and Blane were wonderful characters individually and together. Not to mention the love story was amazing!! I hated that the book ended!